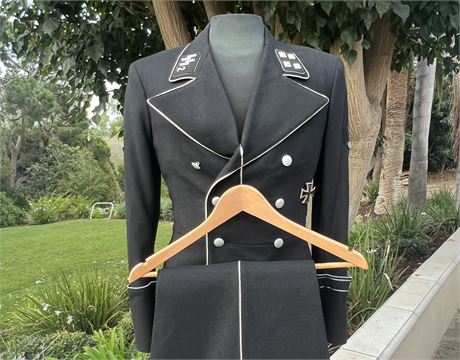 In my 30-plus years of collecting and dealing, I have seen exactly 3 of these, including this one.  This uniform set came out of an estate in Virginia many years ago, and was just acquired by me in a group purchase.  Wool is extremely soft and fine, as you would expect of a uniform with this quality and purpose.  Insignia is the finest you will encounter. SS2 and Germania cuff-title are both sewn with the finest skill and materials - they look like they were carved from a block of aluminum using a laser!  Buttons are all matching.  Size on tunic is about a 40S, and pants are matching.  Uniform is in MINT condition, and includes ONE Iron Cross 1st Class, WW1.  Given the number of loops, and the buttons which are dated 1937, and insignia, I would definitely place this tunic in 1937 or possibly early 1938, before the SS-Verfügungstruppe (Germania, Deutschland, Der Führer, and Adolf Hitler) were incorporated into Waffen-SS.

This is a rare instance where despite not being physically named, a combination of elements of this ensemble has conclusively identified the original owner, to a 99.99% degree of certainty.  I spent time going through the 1937 and 1938 rank lists (I have them all), and only ONE Officer could qualify to have worn this uniform: Dr. Paul Koster.  Promoted to Sturmbahnfürer in 1935, Koster had SS Number 3703, and through December 1938, was the ONLY member of the SS who had only one award - the sports badge.  He did have the sword, the ring, and due to his early SS number, the old-fighter chevron.  I have loaned out my wartime rank lists, so I do not know yet what became of him.  That he was educated (a Doctor), makes perfect sense, that he would have had the money to purchase this rarely worn uniform.

I have located one of his grandsons online, who was inquiring on a website about his grandfather's service time.  I have attached a PDF of his career, that the grandson wrote and published online, and have reached out to him to see if he has more photos of his grandfather to share!  Of interest, he died from a headshot in a "hunting accident" in 1943 in Riga, Latvia, and promoted to Standartenführer posthumously!