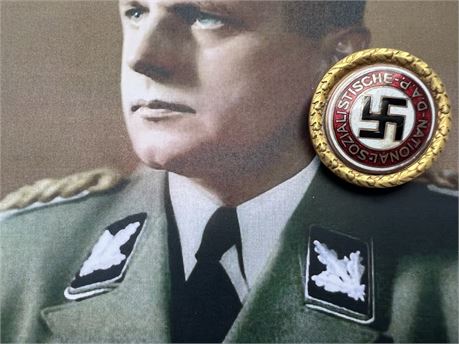 An exquisite opportunity to own one of the better Gold Party Badges in collecting.  Otto Ohlendorff's main career "lowlight" was that he was commander of Einsatzgruppe D, which perpetrated mass murder in Moldova, south Ukraine, the Crimea and, during 1942, the North Caucasus. He was tried at the Einsatzgruppen Trial, convicted and executed in 1951.  Prior to his conviction, he served as a witness to the prosecution of war criminals, and offered hours of testimony (available on audio) concerning the details of the development of extermination techniques in the east.

This is a unique opportunity to add the Gold Party Badge of a infamous, high ranking SS officer with definite period photographic documentation.  There are two distinct features of this badge that are worth noting. First, the badge features a repair to the enamel. This damage is evident in the 1942 vintage photo of Ohlendorf, below. Second, note that the badge’s enamel device is mounted incorrectly, with the “D.A.P” at the 9 o’clock position, as opposed to the 6 o’clock position. A close study of the portrait reveals the same “incorrect” positioning of the device. It is likely the badge was dropped and the enamel center chipped and came loose. He was wearing the exact same badge in the photograph prior to having the enamel repaired but after having had the center re-attached, which was positioned incorrectly.  When the enamel was repaired, no effort was made to fix the positioning.