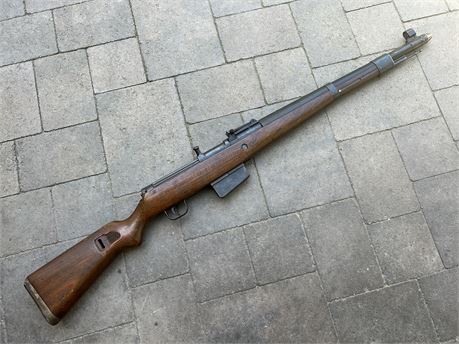 This is a rare and desirable Walther Gewehr 41 (G41) rifle from World War II. The receiver is marked with 'ac 43' code, indicating that it is a Walther production  (Mauser made them too). There were fewer than 10,000 estimated G41s produced before production switched to the G43/K43. These early G41 series of rifles used the "Bang Gas-Trap" system which employed a barrel mounted "Gas Trap" muzzle cone to trap hot gas that was bled off when the round was fired, which cycled the action. This rifle was very short lived but used primarily and often on the Eastern Front where a semi-automatic rifles was a distinct advantage. This specimen has all matching numbers.  The gun is Waffen Amt 359 marked in many places.  The gun was used, and shows some wear on the receiver and other areas.  This gun has NOT been touched since the end of the war, and is out of a local San Diego family.