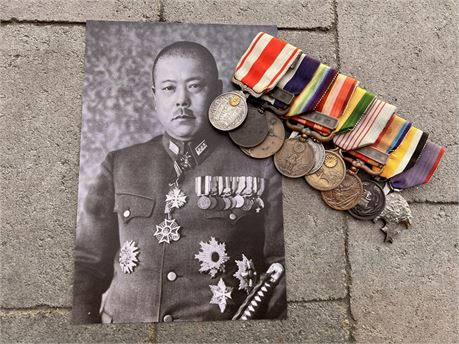 This is a fantastic discovery.  I purchased this bar at the Show of Shows in 2021, happy to purchase it because it was such a long bar ... 9 place medal bars for Japanese soldiers is uncommon.  Over the summer I had been doing research when time permitted, in hopes of spotting the medal bar in wear by a high-ranking General.  Well, as luck would have it, I found an exact match.  This bar is identical to the bar pictured in wear by famous General Tomoyuki Yamashita.  While it is impossible to prove without a shadow of a doubt that it was his medal bar, this combination of medals is very scarce, and as luck would have it, details of this bar match exactly when you compare it to the very clear photos of him wearing the bar.  That I paid a "standard" price from the picker who sold it to me, and not a "fantasy" price due to a story attached, I have every reason to believe this is his medal bar.

Yamashita was a Japanese general of the Imperial Japanese Army during World War II. Yamashita led Japanese forces during the invasion of Malaya and Battle of Singapore, with his accomplishment of conquering Malaya and Singapore in 70 days earning him the sobriquet "The Tiger of Malaya" and led to the British Prime Minister Winston Churchill calling the ignominious fall of Singapore to Japan the "worst disaster" and "largest capitulation" in British military history.[3] Yamashita was assigned to defend the Philippines from the advancing Allied forces later in the war, and while unable to prevent the Allied advance, he was able to hold on to part of Luzon until after the formal Surrender of Japan in August 1945.

After the war, Yamashita was tried for war crimes committed by troops under his command during the Japanese defense of the occupied Philippines in 1944. Yamashita denied ordering those war crimes and denied having knowledge that they even occurred. Conflicting evidence was presented during the trial concerning whether Yamashita had implicitly affirmed commission of these crimes in his orders and whether he knew of the crimes being committed. The court eventually found Yamashita guilty and he was executed by hanging in 1946. The ruling against Yamashita – holding the commander responsible for subordinates' war crimes as long as the commander did not attempt to discover and stop them from occurring – came to be known as the Yamashita standard.