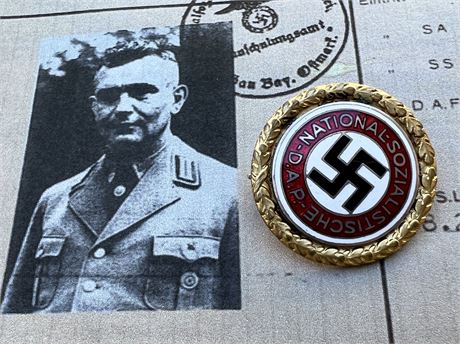 Fantastic Mint Condition Gold Party Badge attributed to Hans STricker, who was from Bayreuth.  He was a political later in 1929 (Kreisamtleiter), and his large records book contains multiple photos of him, including two of him wearing his Gold Party Badge!  Please note: there is some dirt above the "0" in his party number (56750), which makes it look like a six.  However, rest assured, the badge matches the number in the files!  if you want a "military style pin" Gold Party Badge in mint condition that is researched, look no further.