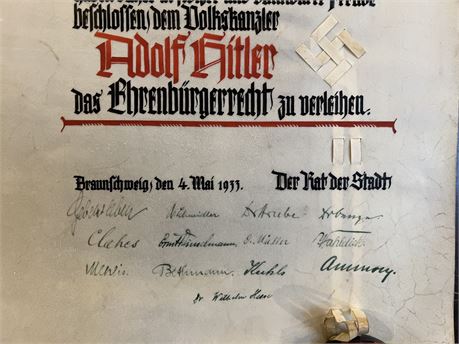 This extraordinary piece of history is a large parchment document from the City of Braunschweig (Brunswick), conferring to Hitler honorary citizenship, which Hitler needed in order to rise to power in Germany. Braunschweig was a very important city to Nazis.  A member of the Hanseatic league, the city was the location of an early political battle between the Freikorps and opposing political forces.  As early as 1930, the city was one of the earliest areas that saw major Nazi participation in government.  During the Nazi rise to power and during WWII, the city never lost prominence.  In fact, the city increased in prominence as more and more NSDAP and military offices were located there.  However, it was because of it being an early hotbed of NSDAP activity, that Hitler worked with the city to become appointed to a governmental position, which gave him the ability to become a German citizen.

This impressive hand-painted parchment document was veteran acquired by me several years ago.  I purchased 5 different documents from five cities, and I kept this one, because it was so tightly rolled, I was unable to display it or take good pictures.  However, in the past weeks, I learned an archival process whereby I can flatten parchment, which I have done.  Accordingly, this document is ready for display in a frame or a case.

The document contains very poetic language, honoring Hitler for his leadership of the National Socialist movement, and finally closes by conferring upon him honorary citizenship.  As mentioned earlier, Braunschweig citizenship was important, as it served as the basis upon which Hitler could be come a citizen, and therefore, go on to lead Germany as Reichs Kanzler.

An excellent opportunity to own a very important piece of Hitler's pre-Kanzler history!